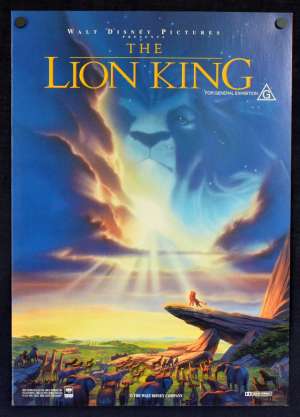 The Lion King is a 1994 American animated epic musical film produced by Walt Disney Feature Animation and released by Walt Disney Pictures. It is the 32nd Disney animated feature film, and the fifth animated film produced during a period known as the Disney Renaissance. Its original songs were written by composer Elton John and lyricist Tim Rice, with a score by Hans Zimmer. The film features an ensemble voice cast that includes Matthew Broderick, James Earl Jones, Jeremy Irons, Jonathan Taylor Thomas, Moira Kelly, Nathan Lane, Ernie Sabella, Rowan Atkinson, Robert Guillaume, Madge Sinclair, Whoopi Goldberg, Cheech Marin, and Jim Cummings. The story takes place in a kingdom of lions in Africa and was influenced by William Shakespeare's Hamlet. The Lion King tells the story of Simba, a young lion who is to succeed his father, Mufasa, as King of the Pride Lands; however, after Simba's uncle Scar (Mufasa's jealous younger brother), murders Mufasa, Simba is manipulated into thinking he was responsible and flees into exile. Upon maturation living with two wastrels, Simba is given some valuable perspective from his childhood friend, Nala, and his shaman, Rafiki, before returning to challenge Scar to end his tyranny and take his place in the Circle of Life as the rightful King.