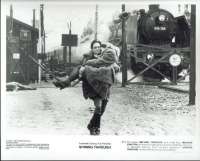 Original Movie Still 8"x10" Shining Through is a 1992 British-American World War II drama film written and directed by David Seltzer and starring Michael Douglas and Melanie Griffith, with Liam Neeson, Joely Richardson and John Gielgud in supporting roles. The film's tagline is: "He needed to trust her with his secret. She had to trust him with her life."