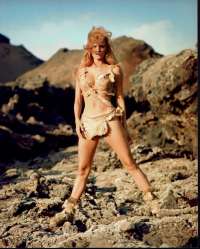 Reprint colour still - Raquel Welch in character as sexy 'Loana'. One Million Years B.C. is a 1966 British adventure/fantasy film starring Raquel Welch and John Richardson, set in a fictional age of cavemen and dinosaurs. The film was made by Hammer Film Productions and Seven Arts, and is a remake of the Hollywood film One Million B.C. (1940).