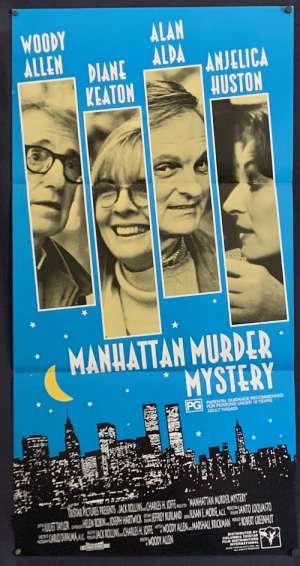 Rare Daybill Poster with the best artwork.Manhattan Murder Mystery is a 1993 American comedy mystery film directed by Woody Allen, co-written by Allen and Marshall Brickman, and starring Alan Alda, Allen, Anjelica Huston, and Diane Keaton. The film centers on a married couple's investigation of the death of their neighbor's wife. The film began as an early draft of Annie Hall, which Allen co-wrote with Brickman. Eventually, the script evolved and principal photography took place in 1992, in the titular city. It was released in August 1993 to positive reviews. Keaton was nominated for a Golden Globe Award for Best Actress – Motion Picture Comedy or Musical. It marked Zach Braff's film debut, as well as the eighth, and most recent, collaboration between Allen and Keaton.