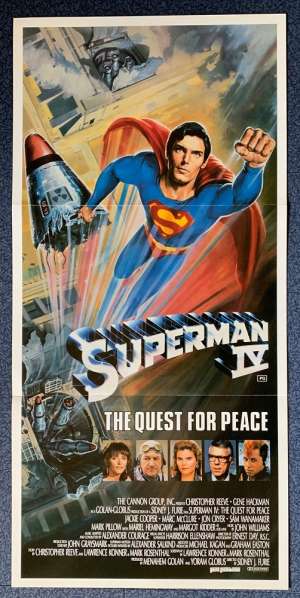 Daybill Poster with artwork by Daniel Goozee.Superman IV The Quest for Peace is a 1987 American superhero film directed by Sidney J. Furie, based on the DC Comics character Superman. It is the fourth and final film in the original Superman film series, and the first film in that series not to be produced by Alexander and Ilya Salkind, but rather by Golan-Globus' Cannon Films, in association with Warner Bros. Christopher Reeve, Magot Kidder and Gene Hackman return in the roles that they are known for. Hackman as Lex Luthor, creates an evil solar-powered version of Superman called Nuclear Man. The film was released July 24, 1987 in the United States and Canada, and grossed $5.6 million during its opening weekend, playing in 1,511 theatres and ranking #4 at the box office. Janet Maslin of The New York Times, wrote that Kidder's portrayal of Lois Lane was "sexy & earnest" in this instalment.