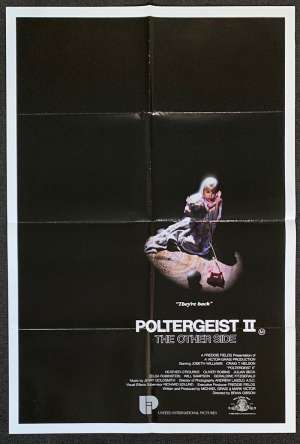 Poltergeist II The Other Side Poster Original One Sheet 1986 Horror

One Sheet Poster.Poltergeist II: The Other Side is a 1986 American supernatural horror film and the second entry in the Poltergeist film series. A sequel to Poltergeist, it features the return of the original family, who are once again confronted by a spirit trying to harm their daughter, Carol Anne. It was financially successful making over $40 million against a $19 million (estimated) production budget and was nominated for the Academy Award for Best Visual Effects. It was followed in 1988 by Poltergeist III. A quote for its film trailer, in which Carol Anne says "They're baaa-aaack," has been referenced endlessly in popular culture ever since.