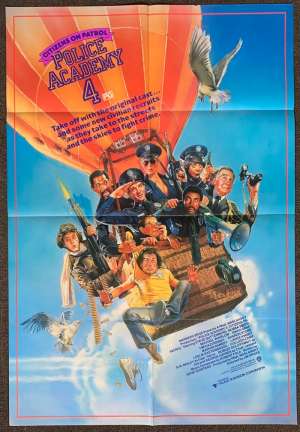 One Sheet Poster with Drew Struzan art.Police Academy 4: Citizens on Patrol is a 1987 American comedy film. It is the fourth instalment in the Police Academy franchise. It was released on April 3, 1987 and is the sequel to Police Academy 3: Back in Training. A group of Police Academy graduates are sent to train a group of newly recruited civilian officers. The original Police Academy cast reprise their roles in the film. Capt. Harris, not seen since the first instalment, returns as the film's nemesis. In Police Academy 2 and 3, Capt. Mauser (played by Art Metrano) filled that role, but Metrano asked to be replaced for the remainder of the series after filming number 3. This was the last Police Academy film to feature Steve Guttenberg as Carey Mahoney. This film also stars a young David Spade in his feature film debut, as well as featuring a brief appearance from pro skateboarder Tony Hawk as Spade's double in a skateboarding scene. The film debuted at number one in the United States weekend box office and would go on to gross a total of $28,061,343.It grossed $76,819,000 worldwide.