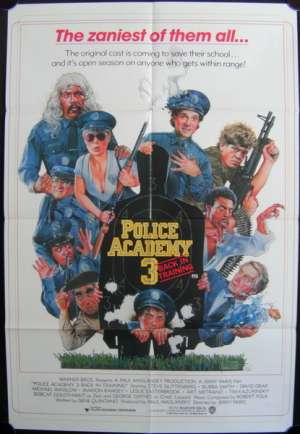 One Sheet Poster Police Academy 3: Back in Training is a 1986 American comedy film directed by Jerry Paris. It is the third instalment of the Police Academy franchise and the sequel to Police Academy 2: Their First Assignment. As with other films in the series, the film was shot primarily in Toronto, Ontario, Canada. The film was an overall box office success, earning $107 million against a budget of $12 million. It is the first film in the series to have a PG rating for language, violence and crude/ribald humour and all films in the series afterwards received a PG rating as well, unlike the first film having an R rating in the USA.