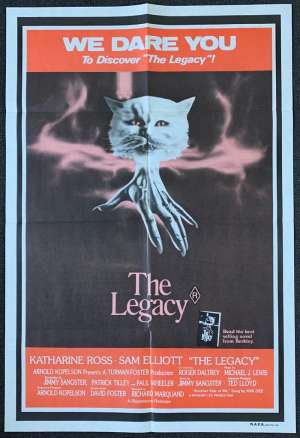 One Sheet Poster. The Legacy is a 1978 horror film directed by Richard Marquand, in his directorial debut, and starring Katharine Ross, Sam Elliott, Roger Daltrey, John Standing, and Margaret Tyzack. It follows an American couple who are summoned to a British mansion while visiting England for a work obligation, where they stumble upon its family's curse. A co-production between the United Kingdom and the United States, The Legacy was released in the United Kingdom in September 1978, and one year later in the United States. Audience reception was mixed, but most critics found the good aspects of the film overshadowed by its shortcomings.