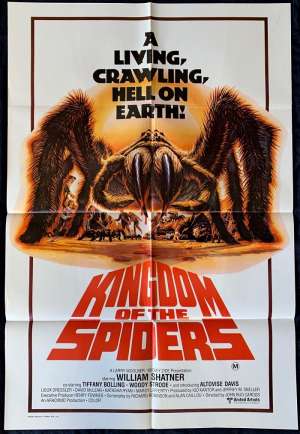 Kingdom Of The Spiders Poster Original One Sheet 1977 William Shatner

One Sheet Poster art by Bob Larkin.Kingdom of the Spiders is a 1977 science fiction horror film directed by John "Bud" Cardos and produced by Igo Kantor and Jeffrey M. Sneller. The screenplay is credited to Richard Robinson and Alan Caillou, from an original story by Sneller and Stephen Lodge. The film was released by Dimension Pictures (not to be confused with the distributor Dimension Films). It stars William Shatner, Tiffany Bolling, Woody Strode, Lieux Dressler and Altovise Davis. The film is one of the better-remembered entries in the "nature on the rampage" subgenre of science fiction/horror films in the 1970s, due in part to its memorable scenes of people and animals being attacked by tarantulas and also because of William (Star Trek) Shatner's starring role. The film was nominated for the Best Horror Film award by the Academy of Science Fiction, Fantasy and Horror Films. Kingdom of the Spiders was one of several horror and science fiction films of the 1970s that reflected a growing sentiment of environmentalism in North America, such as Day of the Animals, Night of the Lepus, Killer Bees, Frogs and Silent Running. It now enjoys a huge cult following.