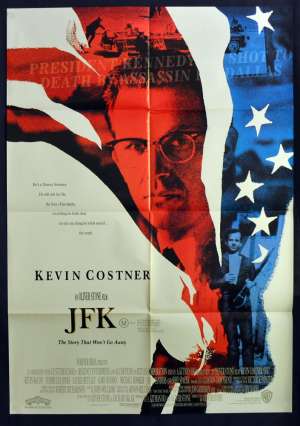 Original Australian One Sheet poster.JFK is a 1991 American conspiracy-thriller film directed by Oliver Stone. It examines the events leading to the assassination of John F. Kennedy and alleged cover-up through the eyes of former New Orleans district attorney Jim Garrison (Kevin Costner). Garrison filed charges against New Orleans businessman Clay Shaw (Tommy Lee Jones) for his alleged participation in a conspiracy to assassinate the President, for which Lee Harvey Oswald (Gary Oldman) was found responsible by the Warren Commission. The film was adapted by Stone and Zachary Sklar from the books On the Trail of the Assassins by Jim Garrison and Crossfire: The Plot That Killed Kennedy by Jim Marrs. Stone described this account as a "counter-myth" to the Warren Commission's "fictional myth." JFK was nominated for eight Academy Awards (including Best Picture) and won two for Best Cinematography and Best Film Editing.