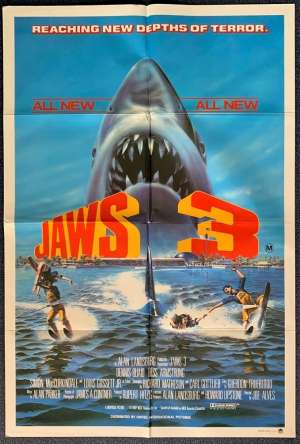 One Sheet Poster with Gary Meyer Art.Jaws 3 is a 1983 American action thriller film directed by Joe Alves and starring Dennis Quaid, Bess Armstrong, Lea Thompson and Louis Gossett, Jr. It is the second sequel to Steven Spielberg's Jaws and the third instalment in the Jaws franchise. The film follows the Brody children from the previous films at SeaWorld, a Florida marine park with underwater tunnels and lagoons. As the park prepares for opening, a young great white shark infiltrates the park from the sea, seemingly attacking and killing the park's employees. Once the shark is captured, it becomes apparent that it was a second, much larger shark who also entered the part that was the real culprit.The film made use of 3D during the revived interest in the technology in the 1980s, amongst other horror films such as Friday the 13th Part III and Amityville 3-D. Cinema audiences could wear disposable cardboard polarized 3D glasses to create the illusion that elements penetrate the screen. Several shots and sequences were designed to utilize the effect, such as the shark's destruction. Since 3D was ineffective in home viewing until the advent of 3D televisions in the late 2000s, the alternative title Jaws III is used for television broadcasts and home media. The film was a commercial success thus another sequel - Jaws: The Revenge was released in 1987.