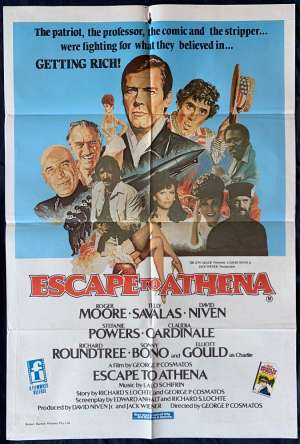 One Sheet Poster.Escape to Athena is a British adventure war film released in 1979, directed and co-authored by George Pan Cosmatos (Rambo Part 2) and produced by Lew Grade's ITC Entertainment (The Eagle Has Landed). The international cast included many well-known actors of the 1970s, including Roger Moore (The Wild Geese), David Niven (The Sea Wolves), Telly Savalas (Kelly's Heroes) and Elliott Gould (Capricorn One). The film is set during the Second World War on a German-occupied Greek island. William Holden makes a cameo in the film as a POW. Elliott Gould's character passes by Holden leaning against the POW barracks, looks at him and asks, "Are you still here?" This is in reference to Holden's Oscar-winning performance in Billy Wilder's World War II/POW film Stalag 17 as Sgt. J.J. Sefton, who actually escapes at the end of that film.