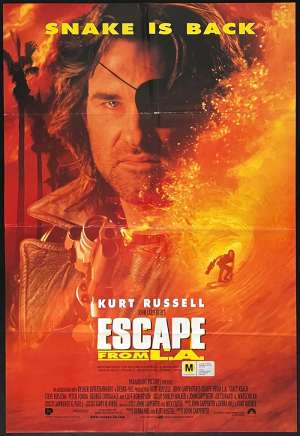 One Sheet Movie Poster.Escape from L.A. (stylized on-screen as John Carpenter's Escape from L.A.) is a 1996 American post-apocalyptic science fiction action film co-written, co-scored, and directed by John Carpenter, co-written and produced by Debra Hill and Kurt Russell, with Russell also starring as Snake Plissken. A sequel to Escape from New York, Escape from L.A. co-stars Steve Buscemi, Stacy Keach, Bruce Campbell, and Pam Grier. The film was in development for over 10 years. At one point, a script was commissioned in 1987 and was written by screenwriter Coleman Luck, with Dino De Laurentiis's company producing. In time, Carpenter and Kurt Russell got together to write with their long-time collaborator Debra Hill. Carpenter insists that Russell's persistence allowed the film to be made, since "Snake Plissken was a character he loved and wanted to play again." John Carpenter speaks today and says “Escape from L.A. is better than the first movie. Ten times better. It's got more to it. It's more mature. It's got a lot more to it.”.