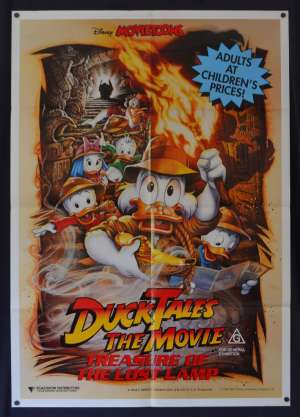 Original One Sheet Poster DuckTales The Movie:Treasure Of The Lost Lamp

Australian One Sheet Poster,art by Drew Struzan.DuckTales The Movie:Treasure of the Lost Lamp is a 1990 animated fantasy adventure film based on the animated television series DuckTales. It was released in theatres by Walt Disney Pictures on August 3, 1990. The events of the film take place between the third and fourth seasons of DuckTales. The release of this film marked the first time Buena Vista distributed an animated film that was not produced by Walt Disney Feature Animation. It was the first Disney animated film to be produced by Disney Television Animation under the banner of Disney MovieToons and animated by Walt Disney Animation France S.A..It was paired with the 1951 Donald Duck short Dude Duck for its theatrical release. The initial voice-overs took one year, and another six months were spent on re-takes. Many notable animation professionals got their start on this project. During the film's opening credits, the title's typeface is similar to that of the Indiana Jones films. Another homage to the Indiana Jones films comes later in the movie when someone looking like Indiana Jones can be seen briefly when Scrooge and Genie visit the Explorer's Club. The film has received generally positive reviews since its original release.