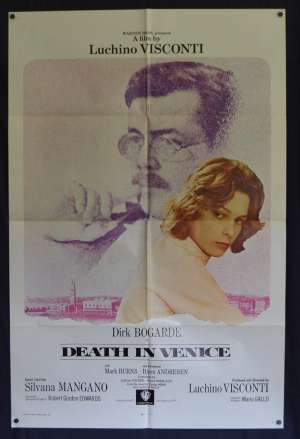 Death in Venice (original Italian title: Morte a Venezia) is a 1971 Italian-French drama film directed in Panavision and Technicolor by Luchino Visconti and starring Dirk Bogarde and Björn Andrésen. It is based on the novella Death in Venice, first published in 1912 as Der Tod in Venedig by the German author Thomas Mann. The film's score was performed by the Orchestra dell'Accademia de Santa Cecilia, conducted by Franco Mannino, and subsequently released by EMI. After the finished film was screened by Visconti in Los Angeles, the Warner Bros. executives wanted to write off the project, fearing it would be banned in the United States for obscenity because of its subject matter. They eventually relented when a gala premiere of Death in Venice was organized in London, with Elizabeth II and Princess Anne attending, to gather funds for the sinking Italian city. The film was met with critical praise and won awards accordingly.