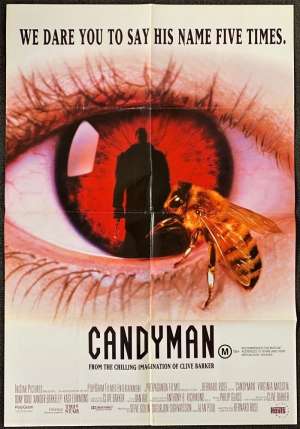 Australian One Sheet Poster.Candyman is a 1992 American supernatural horror film written and directed by Bernard Rose. It was produced by Clive Barker and Steve Golin, based on the short story "The Forbidden" by Clive Barker, though the film's scenario is switched from England to the Cabrini–Green public housing development on Chicago's Near North Side. The film's music was written by the composer Philip Glass. It stars Virginia Madsen, Tony Todd, and Xander Berkeley. The plot follows a graduate student (Madsen) completing a thesis on urban legends who encounters the legend of "Candyman" (Todd), an artist and son of a slave who had his hand severed and was then murdered.It was released theatrically by TriStar and PolyGram Filmed Entertainment on 16 October 1992. It grossed over $25 million over an $8 million budget. Candyman spawned two sequels, Candyman: Farewell to the Flesh, and Candyman: Day of the Dead.