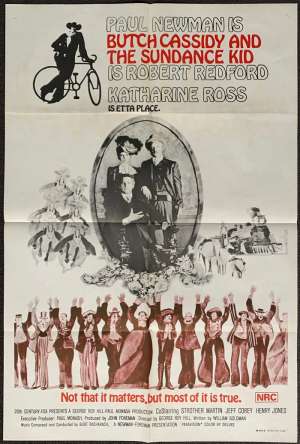 One Sheet Poster 1970's Re-Issue.Butch Cassidy And The Sundance Kid is a 1969 American Western film directed by George Roy Hill and written by William Goldman. Based loosely on fact, the film tells the story of Wild West outlaws Robert LeRoy Parker, known as Butch Cassidy (Paul Newman), and his partner Harry Longabaugh, the "Sundance Kid" (Robert Redford), who are on the run from a crack US posse after a string of train robberies. The pair and Sundance's lover, Etta Place (Katharine Ross), flee to Bolivia in search of a more successful criminal career, where they meet their end.The role of Sundance was offered to Jack Lemmon, whose production company, JML, had produced the film Cool Hand Luke (1967) starring Newman. Lemmon, however, turned down the role; he did not like riding horses, and he felt he had already played too many aspects of the Sundance Kid's character before. Other actors considered for the role of Sundance were Steve McQueen and Warren Beatty. Beatty turned it down claiming that the film was too similar to Bonnie and Clyde. According to Goldman, McQueen and Newman both read the scripts at the same time and agreed to do the film. McQueen eventually backed out of the film due to disagreements with Newman over credits. The film won four Academy Awards and numerous others. In 1979 Butch and Sundance: The Early Days, a prequel, was released starring Tom Berenger as Butch Cassidy and William Katt as the Sundance Kid.