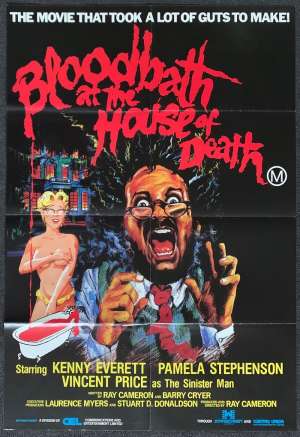 Bloodbath At The House Of Death Poster Original One Sheet 1983

Australian One Sheet Poster.Bloodbath at the House of Death is a 1983 comedy horror film starring the British comedian Kenny Everett and featuring Vincent Price. It is an over-the-top spoof loosely inspired by The Amityville Horror and other horror films from the same period. The film was shot entirely on location at Potters Bar in Hertfordshire, England and upon release it was given an 18 certificate in the United Kingdom.