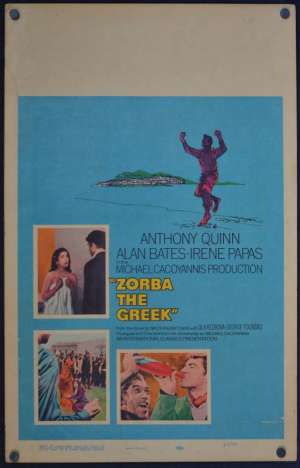 USA Window Card.Zorba the Greek is a 1964 British-Greek comedy-drama film written, produced, edited, and directed by Greek Cypriot Michael Cacoyannis and starring Anthony Quinn as the titular character. Based on the 1946 novel, The Life And Times Of Alexis Zorba by Nikos Kazantzakis, the film's cast includes Alan Bates, Lila Kedrova, Irene Papas, and Sotiris Moustakas. The film was shot on location on the Greek island of Crete. Specific locations featured include the town of Chania, the Apokoronas region and the Akrotiri peninsula. The famed scene in which Quinn's character dances the Sirtaki was filmed on the beach of the village of Stavros. The film was a smash hit. Produced on a budget of only $783,000, the worldwide gross was between $18.8 million to $23.5 million. It was the 19th highest-grossing film of 1964. Contemporary reviews were generally positive, with Anthony Quinn and Lila Kedrova receiving numerous accolades for their performances.