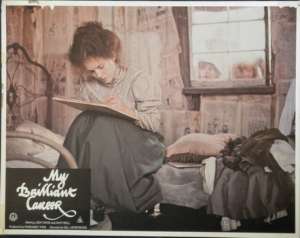 My Brilliant Career Country Of Origin 11 x 14 Lobby Card.  My Brilliant Career 1979 directed by Gillian Armstrong and based on the novel of the same name by Miles Franklin. Starring Judy Davis and Sam Neil, the film was shown at Cannes in 1979 and received a warm reception. The film had its international debut in New York City at the New York Film Festival on 1 February 1980, followed by a release in Japan on 2 January 1982, and in Poland on 23 July 2007 at Era New Horizons Film Festival.