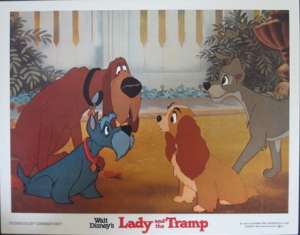 Lady and the Tramp tells the story of a female American Cocker Spaniel named Lady who lives with a refined, upper-middle-class family, and a male stray mutt named Tramp. When the two dogs meet, they embark on many romantic adventures.The 15th film in the Walt Disney Animated Classics series, it was the first animated feature filmed in the CinemaScope widescreen film process.