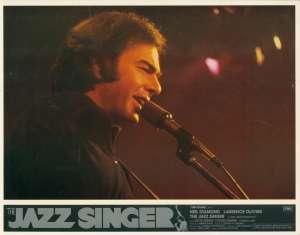 USA Lobby Card Original.The Jazz Singer is a 1980 American musical drama film directed by Richard Fleischer and produced by Jerry Leider. The film stars Neil Diamond (in his acting debut), Sir Laurence Olivier and Lucie Arnaz, and tells the story of a young singer who is torn between tradition and pursuing his dreams as a pop singer. Based on the 1925 play of the same name by Samson Raphaelson, this film is the fourth adaptation of the play, after the 1927 and the 1952 theatrical adaptions, and a 1959 television adaptation. The Jazz Singer was released by AFD on December 19, 1980, and was a commercial success doubling its $13 million budget by making $27.1 million (not including sales of the soundtrack album, which shipped quintuple platinum, or over 5 million copies, making it the most successful of Diamond's recording career). Critic’s praised Lucie Arnaz's performance and Diamond's accompanying soundtrack and live musical performances in the film. The soundtrack eventually reached multi-platinum status became and one of the more successful film soundtrack albums in history. Diamond was nominated for a Golden Globe Award.