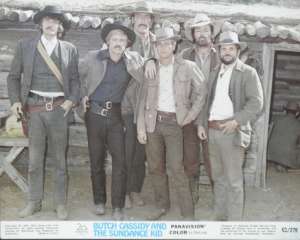 Lobby Still USA 8"x10".Butch Cassidy and the Sundance Kid is a 1969 American Western film directed by George Roy Hill and written by William Goldman (who won the Academy Award for Best Original Screenplay for the film). Based loosely on fact, the film tells the story of Wild West outlaws Robert LeRoy Parker, known as Butch Cassidy (Paul Newman), and his partner Harry Longabaugh, the "Sundance Kid" (Robert Redford), who are on the run from a crack US posse after a string of train robberies. The pair and Sundance's lover, Etta Place (Katharine Ross), flee to Bolivia in search of a more successful criminal career, where they meet their end.