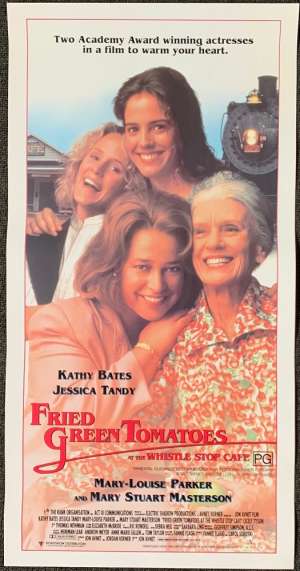 Rare Rolled Daybill Poster.Fried Green Tomatoes is a 1991 American comedy-drama film directed by Jon Avnet (Risky Business) and based on Fannie Flagg's 1987 novel Fried Green Tomatoes at the Whistle Stop Cafe. Written by Flagg and Carol Sobieski, and starring Kathy Bates, Jessica Tandy, Mary Stuart Masterson, Mary-Louise Parker, Cicely Tyson and Chris O’Donnell. The film tells the story of a housewife who, unhappy with her life, befriends an elderly lady in a nursing home and is enthralled by the tales she tells of people she used to know. Avnet wrote the film with Jessica Tandy in mind; she expressed excitement about making the film. Having worked with Kathy Bates and Chris O'Donnell previously he offered them the roles of Evelyn Couch and Buddy Threadgoode respectively. Bates read the script and loved the characters and was particularly keen to work with Tandy. Mary-Louise Parker was casting director David Rubin's first choice for the role of Ruth Jamison. Both Lousie-Parker and Mary Stuart Masterson had great chemistry when they read their lines together. Scouting for a location, the production designer found Juliette, Georgia, a town that was, according to Avnet, nearly deserted. The building chosen to be the Whistle Stop Café was formerly an antique and hardware store. Flagg based the Whistle Stop Café on the real-life Irondale Café in Irondale, Alabama. The scene where Idgie goes to collect honey from a tree stump for Ruth was originally intended to be performed by a stunt double. However, after the latter backed out at the last minute, Masterson volunteered to do it herself. The footage of her covered in a swarm of live bees is seen in the final version of the film. Fried Green Tomatoes received two Oscar nominations for Best Supporting Actress and Best Adapted Screenplay.Receiving 2 BAFTA nominations,including Best Actress and garnered three Golden Globe nominations, including Best Motion Picture – Musical or Comedy. The film was also nominated for the Guldbagge Award for Best Foreign Film.