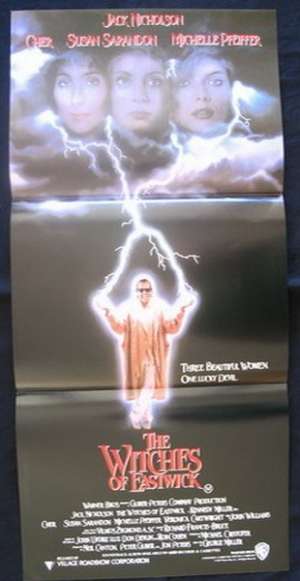 Daybill Poster.The Witches Of Eastwick is a 1987 American comedy-fantasy film based on John Updike's novel of the same name. Directed by George Miller, the film stars Jack Nicholson as Daryl Van Horne, alongside Cher, Michelle Pfeiffer and Susan Sarandon as the eponymous witches. The film was nominated for two Academy Awards in the categories of Best Original Score (for John Williams' music) and Best Sound and it won a BAFTA Award in the category of Best Special Effects, and received a nomination for the Hugo Award for Best Dramatic Presentation.