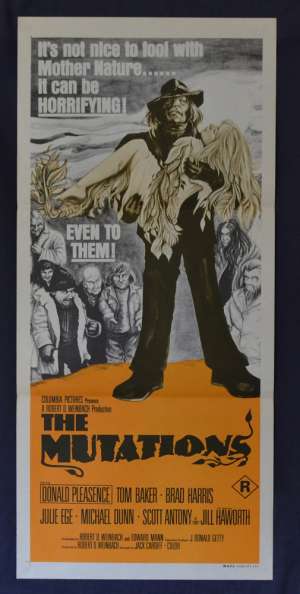 The Mutations is a low budget 1974 British-American science fiction/horror film directed by Jack Cardiff. The film was also released under the title The Freakmaker. The films storyline is as follows: A deranged genetic scientist abducts college students as human guinea pigs that he uses in his experiments in crossbreeding plants with humans. The failed experimental mutants are then given to a cruel circus freak show owner who exploits them to the fullest. However, the mutants and the circus freaks will not be denied justice. Stars of the film included Donald Pleasance (The Great Escape), Tom Baker (Dr Who), Brad Harris (Falcon Crest TV) & Julie Hedge (Up Pompeii). The film has over the years gained a cult following.