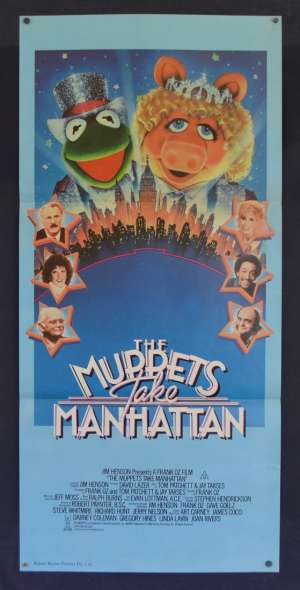 The Muppets Take Manhattan is a 1984 American musical comedy film directed by Frank Oz. It is the third of a series of live-action musical feature films starring Jim Henson's Muppets with special appearances by Art Carney, James Coco, Dabney Coleman, Gregory Hines, Linda Lavin, and Joan Rivers. The film was produced by Henson Associates and TriStar Pictures, and was filmed on location in New York City during the summer of 1983 and released theatrically the following summer. It was the first film to be directed solely by Oz (who also performs Sam the Eagle, Fozzie Bear, Miss Piggy, and Animal), as he previously co-directed The Dark Crystal with Henson. The Muppets Take Manhattan opened on July 13, 1984 to mostly positive reviews and grossed $25,534,703 making it the second highest-grossing G-rated film of 1984.