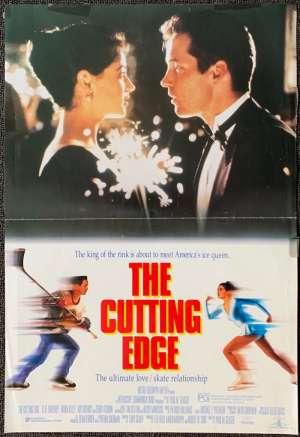 Mini Daybill Poster.The Cutting Edge is a 1992 American sports-romantic comedy film directed by Paul Michael Glaser (Starsky And Hutch TV Series) and written by Tony Gilroy. The plot is about a rich, spoiled figure skater (played by Moira Kelly- Billy Bathgate) who is paired with an injury-sidelined ice hockey player (played by D. B. Sweeney – Memphis Belle) for Olympic figure skating. Competing at the 1992 Winter Olympics in Albertville, France, they have a climactic face off against a Soviet pair. The film was primarily shot in Hamilton, Ontario, Canada. The film's theme song "Feels like Forever" was performed by Joe Cocker and written by Diane Warren and Bryan Adams. The Cutting Edge was released on March 27, 1992 and grossed $25,105,517 domestically. Audiences surveyed by CinemaScore gave the film a grade "A-" on scale of A to F.