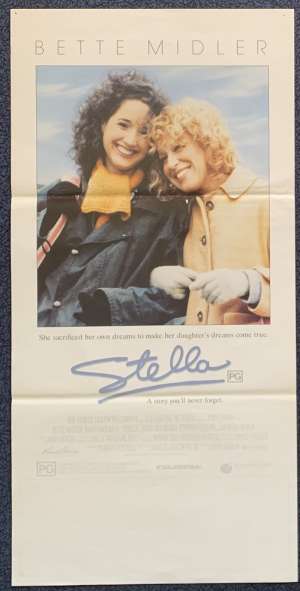 Daybill Movie Poster.Stella is a 1990 American drama film produced by The Samuel Goldwyn Company and released by Touchstone Pictures. The screenplay by Robert Getchell is the third feature film adaptation of the 1923 novel Stella Dallas by Olive Higgins Prouty. Previous film versions were Stella Dallas (1937) and the silent film Stella Dallas (1925). This film version differs from earlier versions in that Stella never marries the father of her child, and in fact, declines his proposal early in the film. The title character played by Midler is a vulgar and unfashionable single mother living in Watertown, NY, who, determined to give her daughter Jenny all the opportunities she never had, ultimately makes a selfless sacrifice to ensure her happiness. John Erman directed a cast that included Bette Midler as Stella and Trini Alvarado as Jenny, with John Goodman, Stephen Collins, Marsha Mason, Eileen Brennan, Linda Hart, Ben Stiller, and William McNamara in supporting roles. Stella debuted at No.2 and the total US gross for the film was $20,062,347.