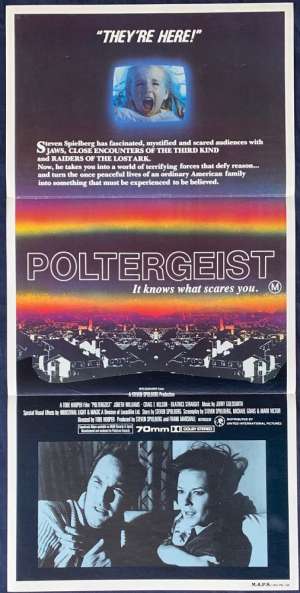 Daybill Poster.Poltergeist is a 1982 American supernatural horror film directed by Tobe Hooper and starring JoBeth Williams, Craig T. Nelson, Heather O'Rourke, and Beatrice Straight. Set in a California suburb, the plot focuses on a family whose home is invaded by malevolent ghosts that abduct their younger daughter, and the family's attempts to bring her back into the real world. Steven Spielberg wrote and produced the film, but a clause in his contract prevented him from directing another film while he made E.T. the Extra-Terrestrial. Therefore, Hooper was selected to direct based upon his work on The Texas Chain Saw Massacre and The Funhouse. First conceived as a dark horror sequel to Close Encounters of the Third Kind entitled Night Skies, when Spielberg approached Hooper to direct, Hooper was less keen on the sci-fi elements and suggested the idea of a ghost story. Spielberg and Hooper would then go on to collaborate on the first treatment for the film. Released by Metro-Goldwyn-Mayer on June 4, 1982, the film was a major critical and commercial success, becoming the eighth-highest-grossing film of 1982. Years since its release, the film has been recognized as a classic within the horror genre and has gained a cult following. Aside from being nominated for three Academy Awards, Poltergeist was named by the Chicago Film Critics Association as the 20th-scariest film ever made, and the scene of the clown doll attack was ranked as #80 on Bravo's 100 Scariest Movie moments.