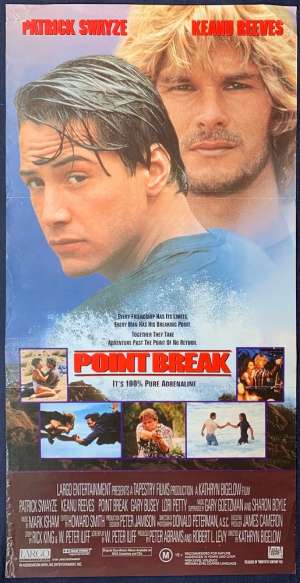 Rare Daybill Poster.Point Break is a 1991 American buddy cop action thriller film directed by Kathryn Bigelow, produced by James Cameron and written by W. Peter Iliff. It stars Patrick Swayze, Keanu Reeves, Lori Petty and Gary Busey. The film's title refers to the surfing term "point break", where a wave breaks as it hits a point of land jutting out from the coastline. The film features Reeves as an undercover cop tasked with investigating and discovering the identities of a group of high-level bank robbers, but develops a complex friendship with the group's leader. Development of Point Break began in 1986, when Iliff wrote an initial treatment for the film. Bigelow soon developed the script with husband James Cameron, and filming took take place four years later. It was shot across the western coast of the continental United States, and was officially budgeted at $24 million, before being released for traditional viewing on July 12, 1991.Point Break opened to generally positive critical reception, with critics highly praising the relationship between Reeves and Swayze. During its theatrical run, the film grossed over $83.5 million, and has since gained a cult following.