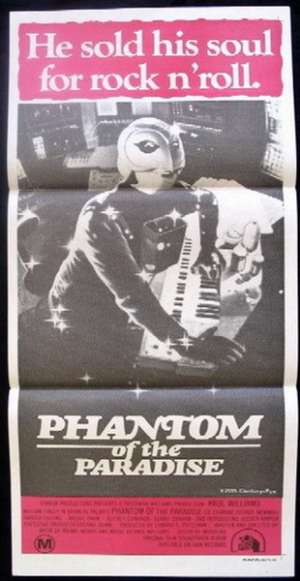 Daybill Poster.Phantom of the Paradise is a 1974 American rock musical horror comedy film written and directed by Brian De Palma and scored by and starring Paul Williams. In the film, a naïve young singer-songwriter (played by William Finley) is tricked by legendary but unscrupulous music producer Swan (Williams) into giving up his life's work, a rock opera based on the Faust legend. The composer dons a bizarre new persona to terrorize Swan's new concert hall in revenge and to have his favourite singer, Phoenix (played by Jessica Harper), perform his music. The story is a loosely adapted mixture of several classic European works: Gaston Leroux's 1910 novel The Phantom of the Opera, Oscar Wilde's 1890 The Picture of Dorian Gray, and Faust by Goethe/Christopher Marlowe. The film earned praise for its music and received Academy Award and Golden Globe nominations. Over the years, the film has achieved cult status.