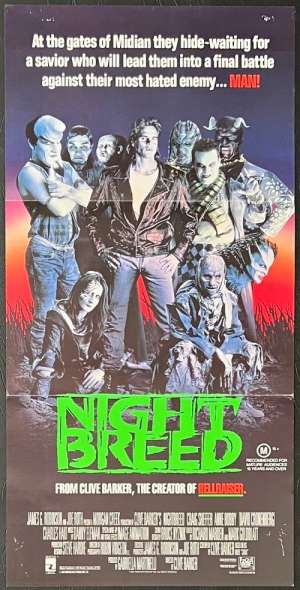 Daybill Poster Rare.Nightbreed (also Night Breed on publicity material, or Clive Barker's Nightbreed) is a 1990 American dark fantasy horror film written and directed by Clive Barker, based on his 1988 novella Cabal, and starring Craig Sheffer, Anne Bobby, David Cronenberg, Charles Haid, Hugh Quarshie, and Doug Bradley. At the time of its release, the film was a commercial and critical failure. In several interviews, Barker protested that the film company tried to sell it as a standard slasher film and that the powers-that-be had no real working knowledge of Nightbreed's story. Since its initial theatrical release, Nightbreed has achieved cult status. In 2014 a director's cut was finally released by Scream Factory much to Barker’s approval.