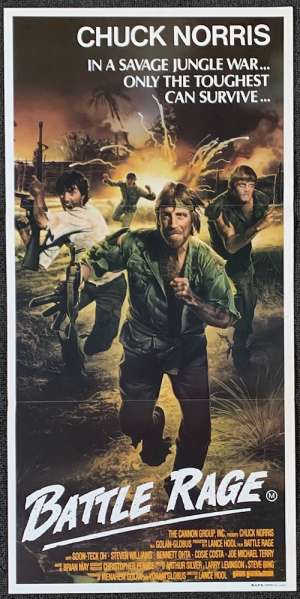 Daybill Poster with great artwork by S.Watts.Battle Rage or Missing in Action 2: The Beginning is a 1985 action/adventure film, and a prequel to Missing in Action, both of which star Chuck Norris. It was directed by Lance Hool and written by Steve Bing, Larry Levinson and Arthur Silver. Battle Rage was filmed back to back with the original Missing in Action and was originally intended to be the first film of the two. But according to Joe Zito, director of what was to become Missing in Action, it was decided that the sequel was a much better film and would be a more successful opener for the franchise. Consequently, Cannon just switched titles and release dates so that the planned sequel was released first and the planned first film was released as a prequel. It was followed by another sequel, Braddock: Missing in Action III, featuring the same character, but with a stand-alone screenplay. On a budget of 2,410,000, the movie made 10,755,000.