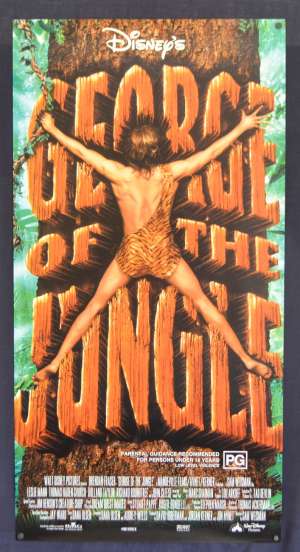 Daybill Poster.George of the Jungle is a 1997 American live-action film adaptation of the Jay Ward cartoon of the same name, which is also a spoof of Tarzan. The film was produced by Walt Disney Pictures with Mandeville Films and The Kerner Entertainment Company and was released in theatres on July 16, 1997. It stars Brendan Fraser as the eponymous main character, a primitive man who was raised by animals in an African jungle; Leslie Mann as his love interest; and Thomas Haden Church as her treacherous fiancé. Well known critic Roger Ebert awarded the movie three out of four stars, praising the film as "good-natured" and complimenting the cast's comedic performances. The movie debuted at No. 2 at the box office behind Men in Black, and eventually went on to become a box office success, grossing $174.4 million worldwide.