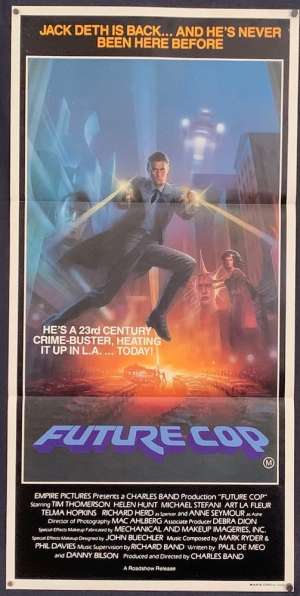 Daybill Poster.Future Cop also known as Trancers is a 1984 American science fiction film directed by Charles Band and starring Tim Thomerson, Helen Hunt, and Art LaFleur. It is the first film in the Future Cop / Trancers series. The film revolves around Jack Deth (Thomerson), a Philip Marlowe-esque police detective from the 23rd century who travels to the 1980s in order to bring his old nemesis to justice. The film portrays a unique method of time travel: People can travel back in time by injecting themselves with a drug that allows them to take over the body of an ancestor. Critics said "Trancers" is a cult sci-fi film directed by Charles Band in a film-noir style. The idea of traveling in time through ancestors is unique and the story has action and humour in the right doses. Helen Hunt shows great chemistry with Tim Thomerson. The film now enjoys a cult following.