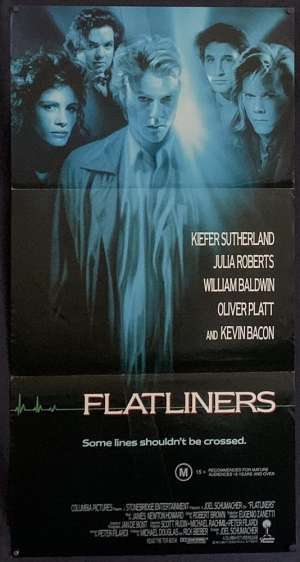 Daybill Poster with cool John Alvin artwork. Flatliners is a 1990 American science fiction psychological horror film directed by Joel Schumacher, produced by Michael Douglas and Rick Bieber, and written by Peter Filardi. It stars Kiefer Sutherland, Julia Roberts, William Baldwin, Oliver Platt, and Kevin Bacon. The film is about five medical students that attempt to find out what lies beyond death and they conduct clandestine experiments that produce near-death experiences. The film was shot on the campus of Loyola University (Chicago) between October 1989 and January 1990. It was nominated for an Academy Award for Best Sound Editing in 1990 (Charles L. Campbell and Richard C. Franklin). The film was theatrically released on August 10, 1990, by Columbia Pictures. The film debuted at No.1 and took in $10 million on its opening weekend.