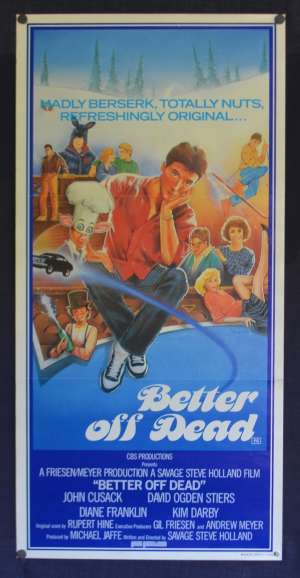 Better Off Dead is a 1985 American dark teen romantic comedy film starring John Cusack and written and directed by Savage Steve Holland. It tells the story of high school student Lane Myer who is suicidal after his girlfriend breaks up with him shortly before Christmas. Parts of the film were shot in Alta, Brighton, and Snowbird in Utah.A dream sequence where hamburgers and fries come to life was produced in stop motion. Hit back catalogue songs that appeared in the film were Howard Jones' "Like To Get To Know You Well", Van Halen's "Everybody Wants Some!!", Neil Sedaka's "Breaking Up Is Hard to Do", Paul Simon's "Fifty Ways To Leave Your Lover", Jimi Hendrix's "Foxy Lady", Frank Sinatra singing "A Man Alone" by Rod Mckuen, Hall & Oates' "She's Gone", and Muddy Waters' "Mannish Boy". The film now enjoys a cult following.