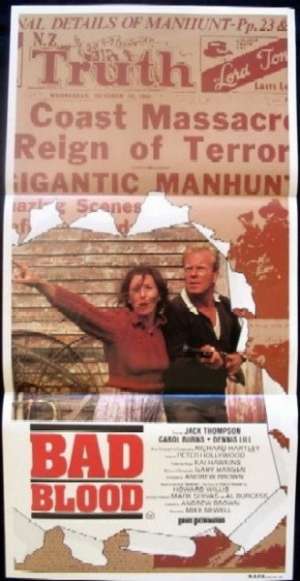 Original Australian Daybill Movie Poster.Bad Blood is a 1982 British-New Zealand thriller film set in the small West Coast town of Koiterangi (now Kowhitirangi), during World War II, and is based on the factual manhunt for mass-murderer Stanley Graham. Directed by English director Mike Newell who went on to direct Four Weddings and a Funeral, much of the film was shot at the original locations. The script was based upon Manhunt: The Story of Stanley Graham, by H. A. Willis (Whitcoulls, 1979) and adapted by New Zealand-born Andrew Brown. Bad Blood stars Jack Thompson and is now considered to be a New Zealand classic.