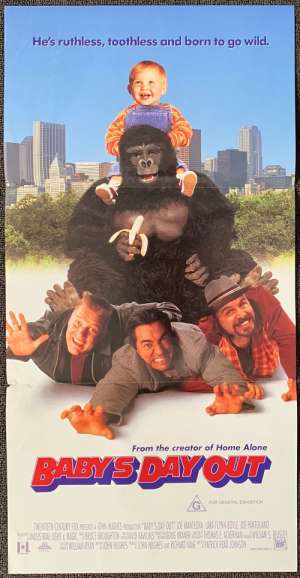 Baby's Day Out is a 1994 American family comedy adventure film, written by John Hughes, produced by Richard Vane and John Hughes, and directed by Patrick Read Johnson. The film stars Joe Mantegna, Lara Flynn Boyle, Joe Pantoliano and Brian Haley. The plot centers on a wealthy baby's abduction by three kidnappers, his subsequent escape and adventure through Chicago while being pursued by the kidnappers. Baby's Day Out was released on July 1, 1994 in the United States. Baby's Day Out was tremendously popular in South Asia, including India, Pakistan, Sri Lanka and Bangladesh. In India, the movie was played at the largest theater in Calcutta for over a year. If you ask a local what the most successful American film has been, they do not say Star Wars but rather Baby’s Day Out!