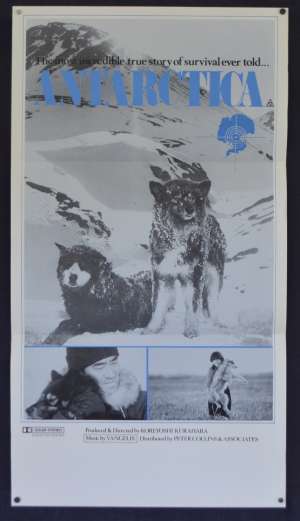 Antarctica (南極物語 Nankyoku Monogatari, lit. "South Pole Story") is a 1983 Japanese film directed by Koreyoshi Kurahara and starring Ken Takakura. Its plot centers on the 1958 ill-fated Japanese scientific expedition to the South Pole, its dramatic rescue from the impossible weather conditions on the return journey, the relationship between the scientists and their loyal and hard-working Sakhalin huskies, particularly the lead dogs Taro and Jiro, and the fates of the 15 dogs left behind to fend for themselves. The film was selected as the Japanese entry for the Best Foreign Language Film at the 56th Academy Awards, but was not accepted as a nominee. It entered into the 34th Berlin International Film Festival, and at the Japan Academy Awards was nominated for the best film, cinematography, lighting, and music score, winning the Popularity award for the two dogs Taro and Jiro as most popular performer, as well the cinematography and reader's choice award at the Mainichi Film Awards. It was a big cinema hit, and held Japan's box office record for its homemade films until it was surpassed by Hayao Miyazaki's Princess Mononoke in 1997.The original electronic score was created by Greek composer Vangelis, who had recently written music for Chariots of Fire and Blade Runner. In 2006, Antarctica's plot was adapted into the film Eight Below, which is dedicated to the memory of the director Koreyoshi Kurahara.