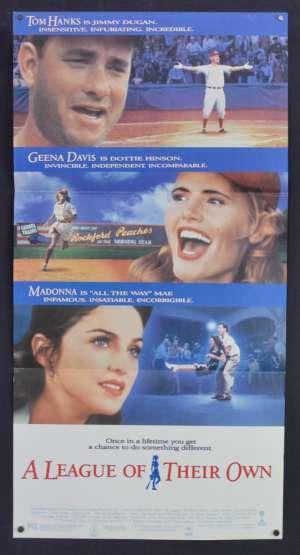 Original Daybill Movie Poster A League Of Their Own

Daybill Poster.A League of Their Own is a 1992 American sports comedy-drama film that tells a fictionalized account of the real-life All-American Girls Professional Baseball League (AAGPBL). Directed by Penny Marshall, the film stars Geena Davis, Tom Hanks, Madonna, and Lori Petty. The screenplay was written by Lowell Ganz and Babaloo Mandel from a story by Kelly Candaele and Kim Wilson. The film was released on July 1, 1992, and was #1 by its second weekend (July 10–12).It was a commercial success, making $107 million in the United States (and an additional $25 million worldwide) on a $40 million budget, and was well received by critics.