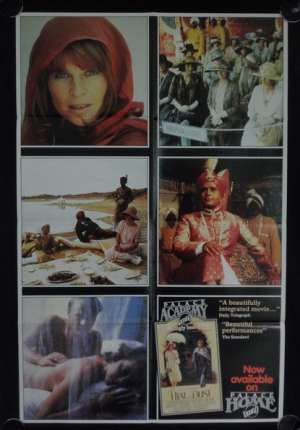 Photosheet Poster.Heat and Dust is a 1983 British historical romantic drama film, with a screenplay by Ruth Prawer Jhabvala based upon her novel, Heat and Dust (1975). It was directed by James Ivory and produced by Ismail Merchant. It stars Greta Scacchi, Shashi Kapoor and Julie Christie. The plot of Heat and Dust follows two intertwined stories. The first is set in 1920s British India and deals with an illicit affair between Olivia, the beautiful young wife of a British colonial official, and an Indian Nawab. The second, set in 1982, deals with Anne, Olivia's great-niece, who travels to India hoping to find out about her great-aunt's life, and while there, also has an affair with a married Indian man. Merchant secured backing in England with a budget of £2.2 million, but halfway through the project some of the expected financing failed to materialize and the production ran out of money. The cast and crew continued working despite not being paid. Sir Jacob Rothschild, after watching some dailies, provided the money to complete the film. Heat and Dust was nominated for the Palme d'Or at the 1983 Cannes Film Festival. At the 1984 BAFTA Awards, it earned eight nominations, including Best Film, and won Best Adapted Screenplay for Ruth Prawer Jhabvala. It was an art house hit in Europe, particularly in England.By March 1983, the film had reached number four on the London box office charts, behind Gandhi, The Verdict, and An Officer and a Gentleman.