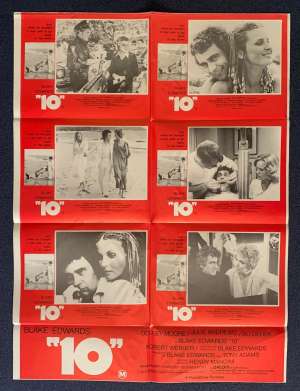 Photosheet Poster.10 is a 1979 American romantic comedy film written, produced, and directed by Blake Edwards and starring Dudley Moore, Julie Andrews, Robert Webber, and Bo Derek. It was considered a trend-setting film at the time and was one of the year's biggest box-office hits. It follows a man in middle age who becomes infatuated with a young woman whom he has never met, leading to a comic chase and an encounter in Mexico. Dudley Moore was a last-minute replacement for George Segal who walked off the set. This would happen again for the film Arthur in 1981 where Segal was replaced for Moore. Blake Edwards sued George Segal and won consequently Edwards was awarded $270,000. However, Segal is still the actor who appears in the scenes set in Mexico. These segments were never re-shot and were used in the final movie. Peter Sellers was the first choice for the lead role but turned down the role multiple times.Bo Derek's appearance shot her to instant stardom and status as a sex symbol. 10 opened at number one in the United States in its opening weekend and went on to be one of the top-grossing films of 1979.It was nominated for 2 Academy and 5 Golden Globes awards.