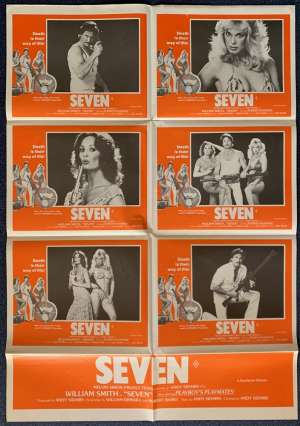 Photosheet Poster.Seven is a 1979 American action neo noir crime film directed by Andy Sidaris and starring William Smith. Seven was filmed at Oahu and Kauai in Hawaii. It was the first film to feature a Playboy playmate which would be a staple of Writer & Director Andy Sidaris films. The first was Susan Kiger and later ones would include Donna Spier, Roberta Vasquez, Cynthia Brimhall, and Julie K. Smith. Robert Baird, who is credited along with William Driskill as screenwriter, is a pseudonym for writer and photographer William Edgar. Seven was released in the United States on September 21, 1979, where it premiered in Los Angeles. The film was distributed by American International who would go on to be Filmways and distribute their first film Dressed To Kill.