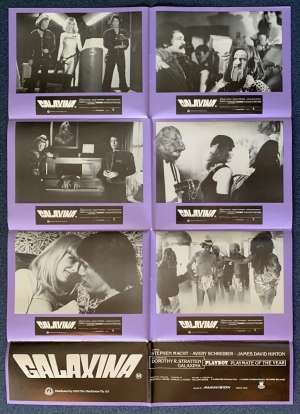 Photosheet Poster.Galaxina is a low-budget 1980 American science fantasy-comedy film written and directed by William Sachs. The film stars 1980 Playboy Playmate of the Year Dorothy Stratten, who was murdered by her husband shortly after the film's release. The film consequently holds somewhat of a cult status. TV movies and books have been written about the star’s life since. Besides its homages to and parodies of science fiction mainstays Star Trek (1966), Star Wars (1977) and Alien (1979),this film also pokes fun at the Western genre. It won the Audience Award at the 1983 Brussels International Festival of Fantasy Film. Originally, the film was supposed to be shot in 20 days. Due to unforeseen bad weather, some sets could not be used and so the production lost a few days of filming. As a result, the producers demanded that scenes be cut to keep the shoot on schedule.