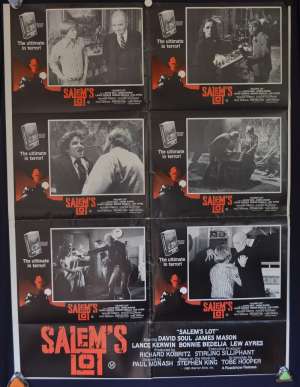 Salem's Lot 1979 Photosheet Poster.In 1979, 'Salem's Lot was adapted to a two-part television miniseries from the original Stephen King novel of the same name. It was directed by Tobe Hooper and starred David Soul as Ben Mears. the production was nominated for three Primetime Emmy Awards and an Edgar Award. It was filmed on location in Ferndale, California. A truncated two-hour version was also released in cinemas in some countries such as Australia.