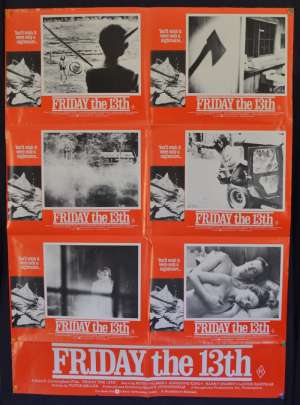 Photosheet Poster.Friday the 13th is a 1980 American slasher film produced and directed by Sean S. Cunningham., It starred Betsy Palmer, Adrienne King, Harry Crosby and Kevin Bacon. Its plot follows a group of teenage camp counsellors who are murdered one by one by an unknown killer while attempting to re-open an abandoned summer camp. Prompted by the success of John Carpenter's Halloween (1978), director Cunningham put out an advertisement to sell the film in Variety in early 1979, while the screenplay was still be written. Filming took place in New Jersey in the summer of 1979, on an estimated budget of $550,000. A bidding war ensued over the finished film, ending with Paramount Pictures acquiring the film for domestic distribution, while Warner Bros. Pictures secured European distribution rights. Released on May 9, 1980, Friday the 13th was a major box office success, grossing $59.8 million worldwide. Critics praised the film's cinematography, score and performances.