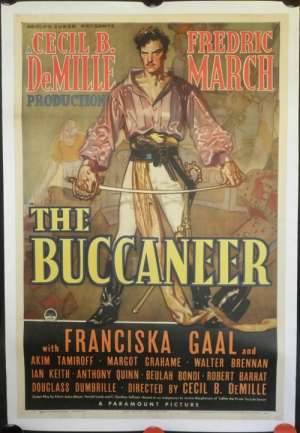 In the War of 1812, the British have sacked Washington and hope to capture New Orleans, where pirate Jean Lafitte romances blueblooded Annette de Remy and openly sells his loot in a pirates' market. But he never attacks American ships. Can the British bribe Lafitte to help them? Can Lafitte persuade American authorities of his loyalty? Will a love triangle between Annette and pretty Dutch girl Gretchen (survivor of a pirates' prize) bring about Lafitte's undoing? This a classic swashbuckling film....seemingly a film very typical for Cecil B. De Mille. Fredric March is superb in his role as Jean Lafite....also interesting to see Anthony Quinn as early as 1938.